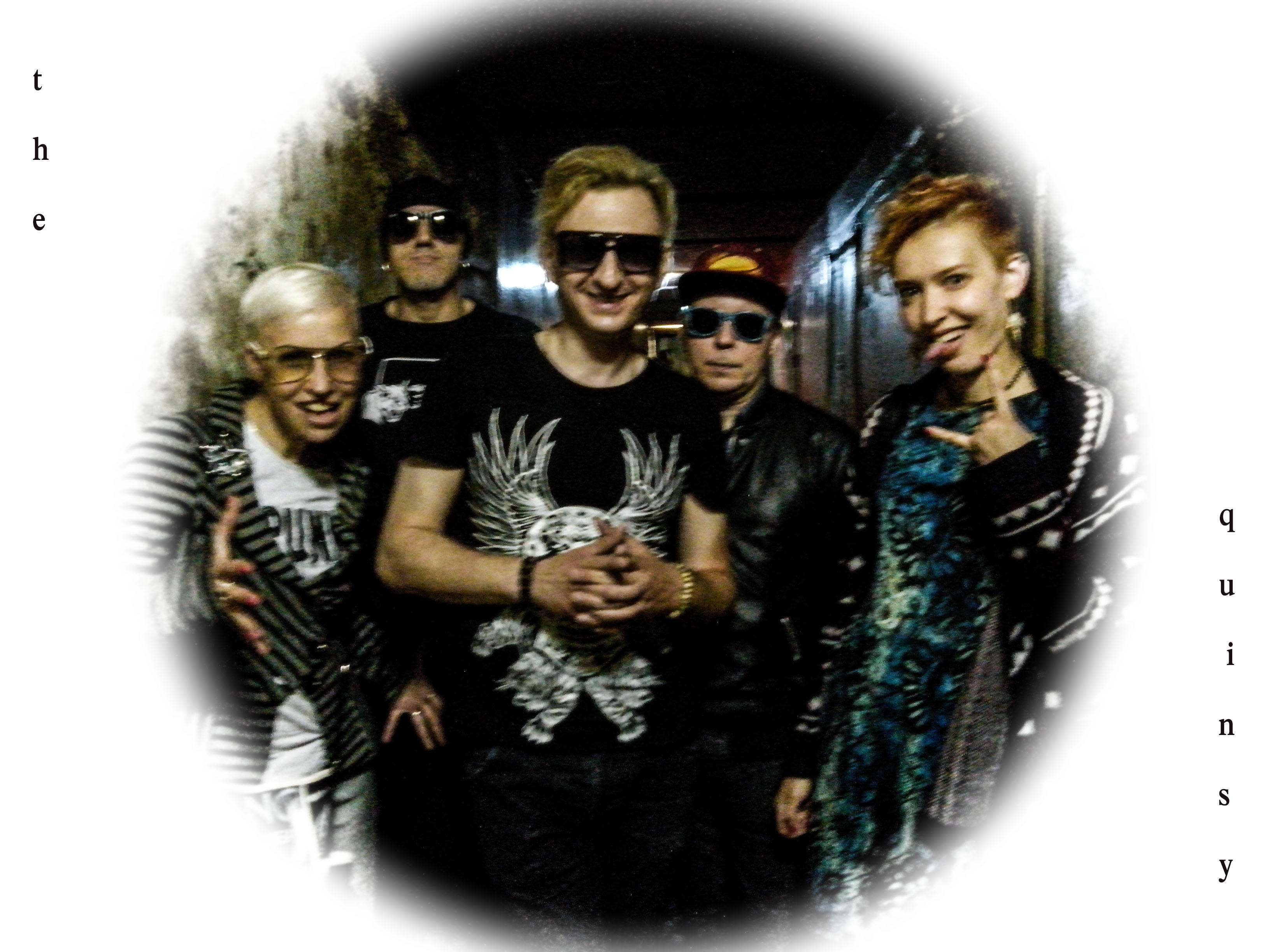 The Russian band The Quinsy was formed in 2001 by Vladimir Tkebuchava. The band started performing in several local underground clubs, such as Red Club.

In 2005 The Quinsy experienced a lot of hardships and was nearly at the end, but the new members and new sound contributed to the band’s complete revival. The very first newborn performance was set in 2007. The Quinsy frequently participated in Saint-Petersburg gothic-festivals and other rock-shows. From that time, the sound of the band was changed completely to rock, post-punk, gothic and psychedelic. At the beginning of 2008 the band had undergone numerous line-up changes. The Quinsy had taken part in various festivals, put on plenty of shows in Saint-Petersburg, Moscow and other cities. In 2011 the band did put on a fantastic show to celebrate the 10th anniversary at Saint-Petersburg Zoccolo club.

The Quinsy released multiple albums. In 2010 a live compilation The Quinsy at concerts vol.1, in 2011 there was a release of The Violet Day which included two remastered tracks from the previous time. In January 2014 they released the album Frivolous Songs, in April the album Sordid Desires, in June it was the live album The Quinsy at concerts vol.2 and in September the album All I Need. To start a new year in Januari 2015 with a mini album with two Russian songs, In Russian. To See You Again was released in June 2015 with also 2 tracks, in October We’ll Never Dance Again (B-Sides 2015) with 3 tracks, in December a full album with 18 tracks The Holy Quinsy. In March 2016 they brought In A Dark Corner with 3 songs, In June the album I Saw The Future with 4 songs, In October the album All About Your Price with 3 tracks. A new year, a new album, in February 2017 a full album Planet Of Monkeys and in March they released Never Be Nice with 4 tracks. All the songs lyrics were written in English except the Russian mini album with two songs in Russian. The Quinsy played along with such popular bands as Last Days of Jesus and Two Witches. Till present time the band keeps on playing and holds firm position on the underground scene.

How did you came up with the name The Quinsy?

So, that was the year 2001. That time me with a few friends played instrumental music without lyrics. Then I wrote first two songs with lyrics. After this we understood that we need to find the name for our project. Once I found “The Quinsy” in Russian-English dictionary (that was a book, not the Internet). First time noone of our members liked this name except me.

I started as a music fan when I was a teenager. That were late 80’s (Perestroyka time). Even now I think that was the Golden Age of music of former USSR. Well, I became a fan of Kino band (Victor Tsoy, the leader of the band died in car crash in 1990). And I’m so happy that I was on their concert in the year 1989. They played new wave and post-punk styles. The most famous Soviet band. So, the next my favorite band is Grazhdanskaya Oborona (the most famous Soviet and Russian punk/post-punk band). Then I started to listen to The Cure and fell in love with them. 90’s are also famous for their electronic music. So, I used to be a raver, I went to many different electronic gigs, I even played drum and base as a keyboardist in one project. By the way first five years The Quinsy played electrowave music. I’ve got inspiration from Front 242, Front Line Assembly, Orbital, The Future Sound Of London and others. Then I went back to post-punk music. I still love very much: Cocteau Twins, Dead Can Dance, The Sound, Joy Division, Siouxsie And The Banshees. And the bands I’ve told before.

I’m singing about many different important (for me) things. About some philosophic problems. About pain and anger. About “no future” and “fuck the system”. Also about Love (big, big Love). All that I see, all that I feel – everything is in my songs. And of course if we talk about emotions – it’s better to go to our gig to feel them all.

Have you been in other bands before?

Shure! Before and parallel with The Quinsy. I participated in many different bands and projects (some of them were created by me), played there different instruments (guitar, bass-guitar, drums, keyboard, programming). Also that bands played different styles – punk, electronic, new wave, post-punk, dream-pop, deathrock and others. Now I’m playing only in The Quinsy. What about the future? Who knows.

Would you like to start another band or project alone or with others? In which genre?

Maybe. But now I even have not enough time for The Quinsy. So, let’s see. Genre? I will think about it later, when I’ll start to do something.

So, I’ve already told about the instruments I play. In The Quinsy I do a lot. When I work on studio I play not only guitar. Sometimes I also play bass-guitar, keys and so on. I write music, lyrics. On concerts I mostly sing and play guitar but sometimes I also play drums. I don’t know now about new instruments to learn. I’m not thinking about it.

How is the atmosphere in Rusland for a band like yours to perform your show?

I can’t say about the whole Russia, I can say about Saint-Petersburg and maybe Moscow because I played mostly in those cities. The atmosphere is quite friendly but this is not a mainstream, not so much people know about our existance.

I like to do everything in the morning. But time is not the most important thing. Unfortunately I’m not always have a choice. Perfect for me would be daytime when all the people are at their work, I’m alone at home working on new material.

Yes, that’s true. It will be an LP with eleven (probably) tracks inside. Hope to finish it in 2017 but can’t promise it.

We have our albums on CD’s. To print CD is quite easy and cheap. Sometimes I think about cassettes. Vinyl is a dream.

It’s hard to say. Maybe it seems too radical for them? I remember punks and other underground and rock people of the late USSR were the real power. They even helped to make politics. Nowadays many people who look as deathrockers for example in fact are not real but just an imitation. Here, in Russia. I don’t know about other world.

Each concert is unique. But we are famous for our powerful gigs. The most memorable night I think is the night in Kiev. We participated in the international gothic fest Children Of The Night/Chorna Rada. Also I remember the concert in St. Petersburg where also played French band The Cemetary Girlz. I also remember the gig with The Last Day Of Jesus in 2008. Many, many concerts…

With Phantoccini, The Nightchild and other friends. Or with The Cure. We are open for the contacts.

We would like to play everywhere but now we are looking for the possibility to play in Europe. Closest countries for the begining – Finland, Baltic countries. Then Scandinavia, Netherlands, Denmark, Germany, Greece, America, UK… Everywhere. Clubs are ok, open-airs, festivals are also.

I will talk again about our country only. Not the best time for subculture. Because it’s capitalism. Just money, money and one more time money. And also new technologies make people more lazy and stupid. But the system presses more and more and I think the situation with the underground will be better in the close future. We need a new cultural revolution, revolution of minds.

I like when I sleep without dreams. I like to be nowhere, to fall in black hole. But I have nightmares quite often. Many of them are repeat again and again. By the way my first favourite movie genre is horrors, my favourite writer is Stephen King. It’s hard to say what is the worst nightmare. Sometimes I see war for example…

Sometimes I see them. And I can’t fall asleep. I just lie and listen to shh… Shhhh…