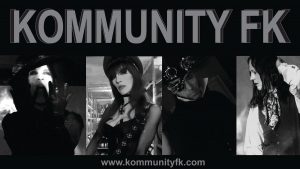 Kommunity FK was created by Patrik Mata in 1978 in the midst of the LA punk explosion. Patrik’s new musical genre became a cross between post punk against a darker gloom that became the genesis of American gothik/deathrock.

Kommunity FK’s beginnings were raw. Mata’s influences of William S. Burroughs, Jean Cocteau, Salvador Dali, and early Bowie were woven through a dreamy musical side combined with experimental synthesized art punk. Mata’s visionary soundscapes were all his own.

The original pronunciation of Mata’s new creation was “Kommunity Fuck”. Very daring for the time when the later part of the band name was the top word of what was then known as the FCC’s ‘seven words not to be uttered’ list. Changed by Mata to “Kommunity FK” so promoters back in the day had no problem placing the headliners name on their marquees. The FK has stuck throughout the decades ever since the bands live performance inception.

~We Will Not Fall~ 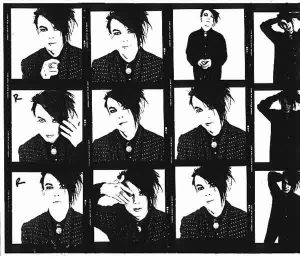 What does the name Kommunity FK mean?

PATRIK: Being the outcast, the outsider, without even trying to be. Becoming a scenester scapegoat created out ov hateful jealousy & evil intentions by others against me & KFK for being original.

What are your song’s about and are there more subjects you would like to write and sing about but didn’t yet?

PATRIK: Each song is diverse from each ov my other songs. Social, sexual, political, psychological, metaphysical, luv & hate, y’know, experiences that affect me in every day life. In fact, some ov my compositions may even be about Enlightenment. I am not a topical composer who writes songs about certain topics just to do so. Mine comes from deep thought, emotions, inner revolution. I also put a lot ov thought into my lyrics & poetry. Maybe a book containing my words & anti art should be a future project.

How do you feel and think about our subculture being there from the beginning and seeing how it grew and took different shapes?

PATRIK: In my opinion, I luv & adore the Deathrock/Gothik scenes for several reasons. I have witnessed it’s flux from within, without & outside for many years. As long as the bands & artistes strive for originality & substance besides maintaining the scene’s deadly gorgeous fashion sense, I will always remain interested.

How did you come to start Kommunity FK? Who or what inspired you to have started this band?

PATRIK: I have shared this backstory many, many times & it has been well documented internationally. I was bored with the stale mundane repetitive Punk scene in Hollywood. It was 1977 & I was trying to start my own band with more intellectual, anti-art experimental influences such as Jean Cocteau, Dali, The DaDaists, The Surrealists, The Dandys, German Expressionists, Minimalism & Noise. I was so inspired with Dame Bowie’s “Low” lp released in 1977 as it went against the then current yet stale grain ov the Punk scene. It’s new musical language represented the sounds that I was also interested in. Bowie lead the way for me personally & especially with his groundbreaking lp, “Low”. I have never ever looked back. 1 year later in 1978 I began to search the wilderness ov the Hollywood underground clubs looking for like-minded musicians.

Being there for a long time, which time you personal concider to be the best to you music wise? 80’s, 90’s or this millennium periode?

PATRIK: O, the 80s were very explosive & pioneering for Kommunity FK, with many unbelievably achieved levels ov high peaks, but also right now in the Here & Now. Kommunity FK went through a few metamorphoses with some purple glistening peaks, for sure. During the 80s, Kommunity FK had the fateful pleasure to have toured with & performed second billed support to the best ov the touring UK Batcave bands & Positive Punk groups. We supported Alien Sex Fiend, Jesus & Mary Chain, Sex Gang Children (2xs), P.I.L., Flesh For LuLu, Nina Hagen, Balaam & The Angel, Leather Nun, Lords Of The New Church, among a cast ov many other incredible bands. For a decent list go to our official website. I will never ever forget the years 1983-1985 when so many incredible original sounding & original looking bands were releasing amazing vinyl lps & 12 inch records that are now collectible & then began touring over here in the States. On August 28, 1981 Kommunity FK had the honour to support Killing Joke at The Whiskey A Go-Go in Hollywood, California. It was during their very first American tour & I received the phone call inviting us to perform second billing on the opening night. Then, thereafter, we became the ‘go to American Deathrock/Goth band’ & had performed with the best that ventured over here to the States..

Which genre would you like to make music in if you would start a side project?

PATRIK: Cold Wave & Synth Wave as I luv synthesizers & I have been blessed by both MOOG & Dave Smith Instruments with synth endorsements. But I would interpret these genres from my own point ov view. I luv all types ov musik & I luv experimental concepts as well, a lot. I also know that if I desired to, I could create & organize the most fked up innovative stripped down hardcore punk noise gang on Earth but perhaps at a later date, if we are not vaporized by any nuke foes by then.

Which concert was the most memorable and why?

PATRIK: Believe it or not, there have been so many blessings throughout these decades where the moment ov pure ecstasy & bliss onstage occurred. There was one concert at Club Scream in Hollywood, California where I was bum rushed by a gang ov vicious Goth girls onstage & they had to be peeled off ov me in order to finish the very last song ov our set. It was a packed house, the band were on holographic fire, my guitar shorted out, a roadie whistles for me to slide my guitar across the stage where he was stationed for him to fix it, he then slides it back across the stage over to me where I had the divine intervention to be able to hold the very last chord ov the song while the song was in crescendo & I’m doing this while on my knees on the stage floor, all while in front ov a full house ov rabid joyous fans. I stood up to then become surprisingly mobbed, all gravity nonsense. Unforgettable.

If you would go on tour again which country you would like to visit and do you prefer a small audience or big audience? A festival or club?

PATRIK: I would luv to have Kommunity FK brought over to Holland, Germany (again), the Mediterranean, & Scandinavia. We have never performed there when we should have several times many years ago. South America is in view now as well.

Are there certain periods where you are more inspired than others? Do you prefer to write lyrics during the day or during the night?

PATRIK: I am mostly inspired by night through til the dawn. My hours are very topsy turvy these days beyond my control but I luv it. While the rest ov this World is asleep, I am awake conjuring sonix & words ov free flowing consciousness. My favorite inspirations are especially on rainy days & when feeling melancholy. It’s so wonderful to have my own studio & to be free to record & document any ideas at Will. Sleep; what’s that?

PATRIK: Vinyl. The quality ov vinyl is astounding especially being played through today’s phonographs. I luv holding an lp in my hands gazing at the cover artwork while the musik plays in the background. The more surface noise the better. I also luv all formats as long as they help the consumer listener to realize some heights ov selflessness.

How was it to be played on MTV and what are your thoughts on this music channel nowaday’s?

PATRIK: It was fantastic for a band like Kommunity FK to be seen on MTV. Think about that. If it wasn’t for their programs 120 Minutes & Elvira’s MTV Halloween Special we would not have reached so many fans in 1985. & to be chosen by Elvira herself to play the video for “Something Inside Me Has Died” as 1 ov her top 5 opening videos was an honour, & for 2 years in a row. I have a copy taken from that initial television broadcast on VHS tape. MTV totally sux now for any sort ov Rock musik to be influential as it was in it’s Beginning.

Are you working on a new album?

PATRIK: Yes. The name ov the new upcoming lp is “MagikaMajestikaMysteria.” I feel very good about the new trax. I plan on releasing a single from it entitled, “Back To Thee Gate” this Autumn. Both Sherry Rubber & I handle all instruments & vocals, while I design drum programming. Artwork is designed by the both ov us as Sherry is a scholar in web artistry & is also a web designer in her own right. This lp will be a breakthrough effort as now I desire to reach out & touch as many people as possible. I pray that Kommunity FK can begin touring this World there after as well. The band just needs to be seen, especially this incredibly powerful line up. We are a multimedia experience with OG stylee & OG Dark Soul. There is no other band like Kommunity FK. Believe.

Do you miss those fine artists that were in Kommunity FK before like Cam Campbell and Dave Roberts formerly know from Sex Gang Children, even now you are playing with your beautiful wife, Sherry Rubber from Texylvania?

PATRIK: It was back in early 1985 when I was invited over to the UK to make musik with Cam Campbell ov Sex Gang Children in Northamptonshire, UK, the city where Bauhaus comes from. Kommunity FK had supported Sex Gang Children a few times on shows up the West Coast which was when I had met Cam. We recorded a few ov my then new compositions inside a brick house studio in The Cotswolds ov Northamptonshire, UK, at a bloke named Graham Bentley’s abode. Graham ‘discovered’ me & invited me to come over to the UK to work a project with some ov the then members ov Sex Gang Children as my band mates. The first person that I hooked up with was Cam Campbell but we both had to meet in Northamptonshire which meant we both had to move there from both our original HQ bases. Cam is an amazing bassist & multi-instrumentalist. I really did luv working with him. I would luv to work with him again at any given chance. Dave Roberts, a founding member also from Sex Gang Children, 1 ov the most innovative bassists I have heard in years during this time, once performed “Something Inside Me Has Died” back in 2006 at The Knitting Factory in Hollywood as a special unannounced guest. Fantastic musician & a very sweet person.

If you would make a new music video who would you like to direct the music vid.?

PATRIK: I want Anton Corbijn to direct/shoot the new Kommunity FK video & if he is too busy, then Werner Herzog, & if he’s too busy, then I wish to have Nick Zedd do it. Each ov these filmmakers have their own unique vision behind a camera.

Do you see dancing shadows in the night that whisper melodies in your ear?

PATRIK: How did you know? Every night. My Muse has been haunting me ever since I was 3 years old….