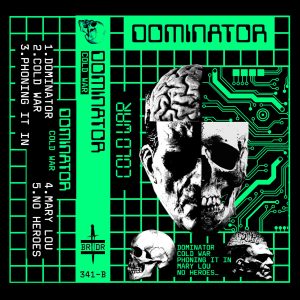 There are bands that have been speeding up like a motorcycle since the first recordings. Here we have a germinating band, and a very strong debut, which can calmly compete with larger names.

I like short, but dense albums. That’s how this is. Less than 18 minutes of music, but there is a lot that’s interesting here. What does the mysterious Dominator hide behind his mask?

The band comes from Los Angeles. This is their second release, after a split with Making Out With Strangers. Already the cover of this EP intrigued me, in the sharp hue of green there is a magnetic blow, beats the face with a synthetic image. The severity of cybernetics of the 80s and a collage of dangerous, anatomical sections. The tape is pleasant in appearance, made by d.i.y. – this is something only cassette climate maniacs are doing today. The real complement of the whole is of course the music.Pressing “play” immediately throws in our ear “Dominator”, which probably due to the name of the band can not be a weak song. Shot from whip, synthetics, mannequins, electronics and swashbuckling vocals in the style of Billy Idol takes us to the B-class cinema, alternative reality, rubbish kitsch of cheap horror and sci-fi. The first song gives us the memory of cinema classics such as “Class 1984”, “Escape from New York”, “Mad Max” or even “Toxic Avenger”. My brain is pierced by soundtracks from movies of the vhs era. If I used to like Sigue Sigue Sputnik, or even Cassandra Complex, it was more musical than pictorial and I did not record it in such categories as the music that Dominator serves. There is a lot of space for synthesizer jams, electro-punk bit, punk clamor and dance pop. The rest is complemented by the aforementioned cinematic imagery. In the title track, “Cold War”, a cool guitar riff, fragrant of trash glam / hard rock, echoes stronger with The Cult compositions, but still an electronic attack. The musicians do not slow down, and the electro-punk machine freezes the organs. There is a moment of reflection in the playful songs, where it bows with a nice new romantic gesture. After this one breath, the band once again throws us into the whirl of music and hits with the rhythm of Nitzer Ebb, although of course with a lot of their own sauce. There are also vocal surprises. The last song “No Heroes” is drilled with a death rock guitar that only emphasizes the entire repertoire. The post-apocalyptic climate is emphasized by a Korg’s cold keys and bass pulse. Like the iconic Belfegore, we have a dance parquet here that pulsates with climaxes that easily kidnap.After questioning, all this makes me think what’s going on here? A band that does not want to get into any genre, with cynicism, juggles styles and turns them upside down, sucks essence from soundtracks from cheap 80’s movies and pumps it to the rock hearts of the classics? It is a tribute to a popcorn dumpster, mutant sounds, garage style combined with the dynamic effect of the superhero from the comic book universe. I like these nonchalant bumping elbows very much, because maybe this insolence of breaking up species is a certain argument. We just have a great story told in 5 songs, where there is no moment of boredom. This diversity will give you a lot of satisfaction. I also suspect in a silent way that in creating music they are not freshmen, because their sounds have this specific, specific touch without a shadow of chance.

I feel that Dominator creates hits in his blood. It is good to find a pearl in the thicket of music, which can go proudly on a shelf, and this one can be purchased from their bandcamp for only few bucks – this also has to be appreciated. I definitely recommend it.